×
Go to content
Douai Abbey: The Monastery of St Edmund, King & Martyr
Published by HSK in News · 31 August 2020
» Last week the community held its annual retreat, though in different circumstances due to Covid-19. Of the non-resident brethren only Fr Boniface was able to be at the monastery for the duration. The mission fathers and Fr Edmund in Rome, as well as the Anglican Benedictinesin Salisbury, joined the retreat conferences via Zoom. The retreat master himself, Bishop Michael Campbell OSA, gave his conferences via Zoom. While the community was denied the experience of fraternity the annual retreat usually affords, it went off rather well. As Fr Abbot noted at the end of the retreat, Zoom actually made the retreat master seem closer to the retreatants. The atmosphere was almost intimate. Our thanks go to Bishop Michael, whose retreat was anchored in the thought and insights of St Augustine of Hippo.
» Fr Boniface has now returned to Ormskirk, and shortly Fr Edmund will be arriving back from Rome on congregational business.
» The recent announcement that the brethren at Downside have decided, after electing Dom Nicholas Wetz of Belmont as its new abbot, to move from their current home in Somerset. It is a great sadness to many but the community at Douai will be praying for the success of Downside's move when it comes.
» Fr Hugh has edited and annotated a book of limericks composed during the Second Vatican Council by a number of bishops, and later translated in Latin by Bishop Bernard Wall. The notes will assist in understanding the specific context of many of the limericks. It is shortly to be published in both hardback and softcover, and can be pre-ordered now on Amazon UK and US or, even better, direct from the publisher without international postage fees as it will be supplied locally in Britain, North America, Europe, Australia and elsewhere - http://aroucapress.com/limericks 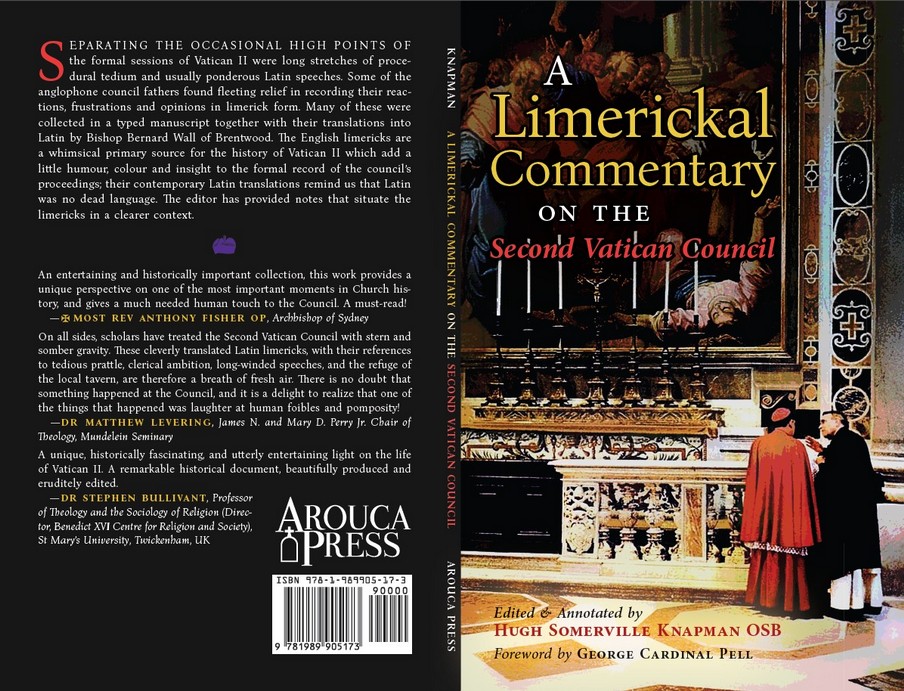 » There is a new Homilies page where will be posted, from time to time, homilies by various of the brethren given at Mass in the abbey church.