Published by HSK · 25 April 2022
» The Triduum saw increased numbers attending the sacred liturgies in the abbey church, reflecting the reduction in the threat posed by the Cvoid pandemic. The music was of a high standard, with a string quartet accompanying the Douai Singers at the Easter Sunday Mass which was celebrated by the Abbot President, Fr Christopher Jamison. There was no Mandatum on Maundy Thursday on account of continuing caution. Because of the large number of guests staying over the Triduum, the monastic refectory was opened to them for Easter Sunday lunch, which was shared with the monastic community. The community enjoyed the traditional holiday during Easter Week in which the weather was near perfect for the time of year.
» Recently the community acquired the Stations of the Cross from the chapel of the recently-closed St John's seminary at Wonersh, and these have been installed in our parish church at Woolhampton. They were carved by Joseph Cribb (1892–1967) who was an apprentice and later colleague of Eric Gill. He was a founder member (with Gill) of the Guild of St Joseph and St Dominic, a Roman Catholic community of artists who lived in Ditchling in Sussex. Cribb carved 20 sets of Stations in his lieftime, and assisted in the carving of the Gill Stations at Westminster Cathedral. The Stations in the abbey church, carved by our own Fr Aloysius Bloor, were designed by Stanbrook nun, Dame Werburg Welch, who also studied under Gill. 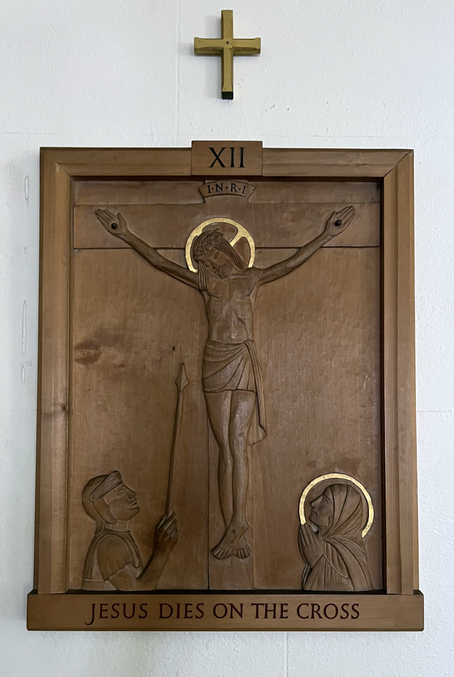